The problem is that we all still want to find a career which makes us happy: but for many there seems to be a conflict between doing what one loves, and making a difference. My initial interest in 80,000 Hours was sparked by a desire to resolve a conflict between wanting to make a difference in my career, and wanting to pursue philosophy research (which I considered fairly low impact.)(1) I recognised that I could potentially make more difference by applying my numerical skills to a high-earning career and donating to greater causes – but the thing is, I just don’t want to do this. And shouldn’t this count for something, even for the aspiring effective altruist? Should we have to give up doing what we love in order to make a difference?

I’d like to suggest that this conflict, although it exists, may be much less than it first appears – for there’s a connection between job satisfaction and making a difference. Firstly, making a difference can be one of the most satisfying ways to lead a career (which I’ll focus on in this post). Secondly, we’re more likely to make a difference in a career which satisfies us (which I’ll explore later).

Being altruistic makes us happy

Psychological research suggests that acting altruistically tends to make us happier than being selfish does. Whether rich or poor, black or white, bankers or charity workers, people who volunteer report better health and happiness than those who do not.(2) Furthermore, a TED talk given by Martin Seligman, a professor in psychology at the University of Pennsylvania, reports that the happiness we get from doing something for someone else has been shown to last longer than the happiness we get by doing something for ourselves.

A paper by bioethicist Stephen Post cites a number of studies connecting altruism and happiness, suggesting that these results are wide-ranging and can be generalised.(3) It also attempts to provide a rationale for the connection: altruistic acts result in more positive social integration, distract from personal problems and enhance meaning and purpose, all of which relate to positive psychology. We might therefore reasonably expect these results to be mirrored in job satisfaction: jobs which help others should tend to be more satisfying, and produce longer-lasting satisfaction than those based on purely selfish principles. This is directly supported by the job satisfaction literature – see our post 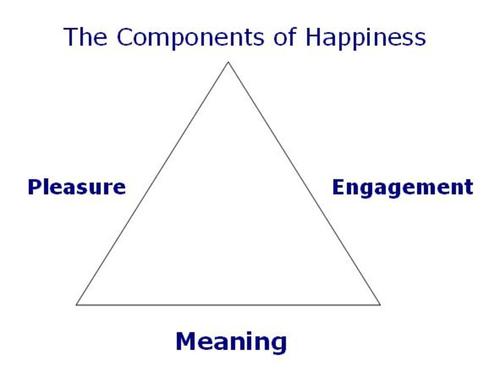 Having a purpose makes us happy

As well as linking altruism to happiness directly, leading an altruistic career might also lead to greater job satisfaction indirectly, by providing a sense of purpose. Martin Seligman identifies three different possible orientations to happiness: pleasure, engagement, and meaning.(4) The pursuit of pleasure has been endorsed since the doctrine of hedonism was first articulated and then used to lay the foundations of utilitarianism. However, whilst pleasure does play a role in determining our happiness, research suggests that the pursuit of meaning and engagement are stronger predictors of overall life satisfaction than the pursuit of pleasure. (5)

A life of meaning is one in which we develop our skills and talents and then apply them towards some greater good. This seems to be precisely what we mean when we talk about “making a difference” or “having an impact” – making a contribution towards something bigger than ourselves. The idea that making a difference is a good way to achieve job (and life) satisfaction goes all the way back to the Aristotle notion of eudaimonia, and has been reinforced by the more recent work of Seligman and others.

The third orientation of engagement is closely related to, and motivated by, Mihaly Csikszentmihalyi’s work on the flow phenomenon. Flow is completely focused motivation, and the state which results from being completely immersed (or engaged) in an activity. Flow is distinct from pleasure or enjoyment: it’s generally considered an unconscious state. Although people may describe flow as enjoyable, this tends to be a judgement made in retrospect, rather than a feeling actually present during the activity. Flow is, however, strongly connected with both positive emotions and increased productivity (5) – the latter which itself tends to lead to a greater sense of achievement and so greater satisfaction. Although engagement and meaning are distinct: we can find ourselves fully engaged in activities which serve no higher purpose, and not all meaningful activities may allow us to achieve the state of flow, the two often coincide. In particular, Seligman suggests that engaging in altruistic activity and acts of kindness are often a good way to experience this unconscious state of flow. (4)

it seems reasonable to conclude that making a difference could be a very good way to achieve job satisfaction – far from conflicting with it. In fact, we may perhaps be more satisfied seeking high impact or altruistic careers (which aim at a purpose beyond ourselves) than seeking careers we anticipate enjoying (which are aimed at pleasure.) As I’ll explore in a later post, our attempts to directly predict what makes us happy can often be flawed.

f(1) Note that of course not all philosophy is necessarily low impact. But let’s be honest, a fair amount of it is – and not just because of its content, but also because a lot of philosophy already receives a great deal of attention from some very intelligent minds.