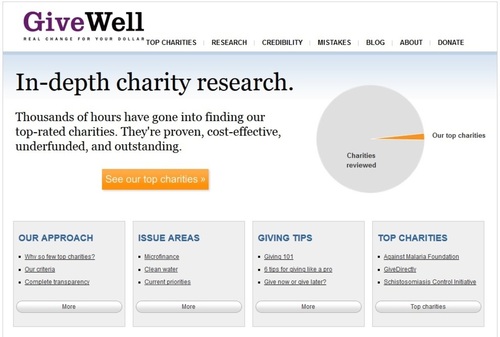 In this post, I offer some thoughts on my experience working at GiveWell. I’ve had a number of different people ask me about this, and I think many people interested in effective altruism are curious about working there. So I thought I would explain my views in detail so that others who are thinking about working there have more information.

I worked at GiveWell for two months in 2012. I was thinking about whether I wanted to work there permanently, so I arranged to work there on a trial basis. When I was working there, GiveWell was doing this with a lot of their new employees to see who was and wasn’t a good match.

I spent the first two weeks evaluating some evidence behind breastfeeding promotion programs (specifically, whether there was a link between breastfeeding and cognitive performance later in life), and then I spent the next six weeks working on cost-effectiveness estimates for three different vaccination programs (neonatal tetanus, a new meningitis vaccine, and measles).

I also participated in GiveWell research meetings, vetted work from other staff, and discussed organizational strategy.

I believe GiveWell is a well-run organization. I’m currently on the board of the Centre for Effective Altruism (CEA), and I very often find myself recommending that CEA solve some problem in a way that is analogous to how GiveWell solved an analogous problem. For example, I recommended that 80,000 Hours use a self-review process similar to the one GiveWell uses, and they did it.

Day to day, what was it like working there?

There was less autonomy than I was used to in academia, but this was less problematic for me than it otherwise would be because I felt pretty in synch with my manager while I was working at GiveWell. Elie Hassenfeld was my primary manager. He would assign me projects. GiveWell emphasized that my job as an employee was not to do what I was told but to instead do whatever best fulfilled GiveWell’s mission, and that I should challenge Elie if I thought that my work assignments didn’t fit with that goal. I did feel comfortable with telling Elie if I thought my work wasn’t the best way to achieve GiveWell’s mission (and I did tell him this a couple of times), so this mitigated the loss of autonomy to some extent. Still, at the end of the day, Holden and Elie were the judges of who was right in these disputes. This isn’t meant as a criticism of GiveWell—I think that’s the right way for them to run the organization—but it was something that mattered to me about the job. (I can’t speak for other employees on this issue, but while I was there, Elie and I did always ultimately reach agreement on what I should be doing.)

For each project I worked on, the main deliverable from my work was an intervention report for the GiveWell website. I would work on a problem for 1-3 days and then get feedback from Elie, sometimes with smaller bits of guidance in between. If Elie agreed with where I was going, we’d move forward, if not I’d adjust and get closer. As work got closer to completion, other staff would vet the work and give feedback. There were about 8 staff at the time, including Elie and Holden, and Elie was the general manager for everyone.

GiveWell has a very direct feedback culture, which I speculate has something to do with the co-founders’ prior work at Bridgewater. I remember getting very direct feedback from Holden and Elie about what they thought my personal strengths and weaknesses were, and I found that this gave me interesting stuff to think about. I liked it and found the communication reasonable and respectful, but I could imagine a lot of other people being intimidated by it.

I really enjoyed getting to know the other staff better. They were all very smart and interesting people, and I learned a lot from conversations with them about research and GiveWell’s methodology. I also made some friends that I stay in close contact with.

Staff were expected to work 40 hours per week, track how they spent their time, and submit time-tracking records.

Overall, what do you think about working there?

For people who may be a good fit and have the opportunity to work at GiveWell, I recommend having a trial period without hesitation. I’ll explain why in this section.

I think GiveWell is strong in the first two areas, and the third varies from person to person, but I found it very satisfying.

In terms of learning, I got a lot out of the job for reasons discussed above. I think a really important part of learning is the quality of the people at the organization. And, in GiveWell’s case, I think the people are outstanding. I’ve had very extended conversations with Holden over e-mail about a variety of issues in effective altruism, and I’ve learned an enormous amount from it. I got the impression that other people working at GiveWell generally hadn’t corresponded with Holden this extensively, so I wouldn’t count on this as someone working at GiveWell, but it’s one of the major reasons I’m as impressed by the organization as I am. I also believe the organization is well-run and has been very successful so far, and this points further in the direction of “these are great people to work with.”

Another important aspect of learning is the type of feedback you receive. Here, I had most of my experience with Elie, but also with other GiveWell staff to some extent. The feedback at GiveWell was very honest, frequent, and detailed. I think best kind of feedback is feedback you get from the real world rather than feedback that’s mediated through people, so the feedback isn’t as strong as it could have been in comparison, say, with someone creating their own start-up. But for feedback that’s mediated through people, rather than the real world, I think the feedback was very strong.

Another important part of personal development is the kind of responsibilities you have. I discussed the kind of work I was doing above. This is an area I was less satisfied with. I felt like there was more interesting work I could have been doing, and the work didn’t line up with the areas that I personally wanted to gain more expertise in. For instance, at the time, I wanted to learn more about how to evaluate causes other than global health and compare them with each other, and the work that I would have had at GiveWell would have primarily been in the area of global health literature reviews and cost-effectiveness modeling. For someone interested in global health, I think the learning opportunity would have been strong, but it wasn’t a good match for my interests at the time. What kind of responsibilities someone would have at GiveWell would depend on GiveWell’s needs at the time and whether these responsibilities are good for the employee’s personal development will depend on the individual.

I think GiveWell is outstanding credentialization and networking for someone who wants to work in effective altruism, but otherwise I’m unclear on how good it is.

Impact of the work

I believe GiveWell’s mission is extremely important and that they are making substantial progress on their mission. The basic case I’d make for this is:

I understand that they also have substantial difficulty finding people who can contribute to their mission, so that there is strong “room for more talent” of the appropriate sort. For people who are a good personal fit and GiveWell would like to hire, I believe that the impact of working at GiveWell is outstanding.

Who would be a good fit to work at GiveWell? Someone who likes research, pays a lot of attention to detail, is obsessed with effective altruism, enjoys (or at least can handle) highly critical feedback, is extremely intelligent and hardworking, is willing to work for very low pay relative to their earning potential, is OK with limited job security, enjoys intellectually challenging work, and likes doing a variety of different things.

GiveWell has had high rates of staff turnover. They were very open with me about this, and it was a major concern about working there. Although they offered to have me there to work longer, they emphasized that it wasn’t a situation where if I just worked hard and did a good job, I’d be likely to have employment in the future. Instead, a good number of employees who worked at GiveWell ultimately later turned out not to be good matches. And Holden and Elie felt this was a possible issue with me as well. This was a major concern for me because my alternative was working in academia, and I believed I was in a position to get very secure employment.

If you like GiveWell so much, why aren’t you working there?

Answering this fully would involve a detailed comparison with the place I ultimately ended up working, the Future of Humanity Institute at Oxford University. But I already touched on reasons above and in the introduction. In brief, I didn’t end up working at GiveWell because the work they wanted me to do didn’t line up well with the work that I wanted to do and that I felt matched my personal strengths, working at GiveWell offered me less autonomy than I would have in an academic position, and I believed that working at the Future of Humanity Institute would offer me more job security and options in the future. In general, it’s also what more people advised me to do when I discussed the issue with them.