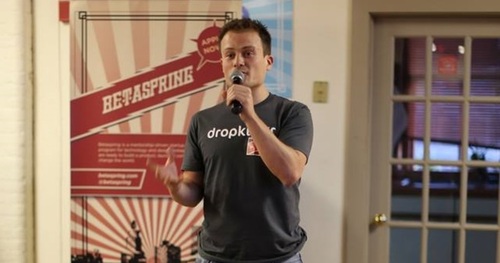 Matt Gibb has been involved with 80,000 Hours since its inception. Early on, he was influenced by the idea of earning to give and has been pursuing this for the last few years through entrepreneurship. When we spoke to him he was focussed on a company dropkic.kr at the startup incubator Betaspring. With dropkic.kr, Matt has tied himself and his co-founders to the mast by adding a legally binding agreement to the company charter to donate ? of any proceeds they from selling their stake to GiveWell or Giving What We Can recommended charities.

He has some experience as a successful entrepreneur, having co founded Promo Push Ltd. in 2010 an electronic dance music promotion company, now servicing 250,000 customers including Sony Music and a subsidiary of Universal music. We talked to him about his experience in tech entrepreneurship and his views on getting into it for those just starting out. What follows is a edited and reworked version of the interview.

Excerpts from the interview

Matt’s entrepreneurship experience
The first company I started was theoxfordtutor.co.uk. We set up a website in a few days, this was in my 1st year of undergrad and then we sent out some details to the college lists. We got 120 people there in 2 days all ready to tutor in Oxford. But we didn’t know what we were doing, so I think I sent some letters out and asked them to advertise our services and nobody did that so we never got any customers.

I’ve tried a few other things and nothing really stuck, but it was just really good learning. I really enjoyed it and I think anyone starting out is going to face a lot of “Try this, it doesn’t work. Try this, it doesn’t work but now we’re better – now we’ve learnt this.” It’s just a matter of keeping that cycle going through and you will just eventually have all the skills and circumstances to get it off the ground.

Have you tried any companies that weren’t Web-based?
No. Because the cost of getting something up there is insignificant compared to anything else. But there is a new trend of physical product startups and manufacturing startups because the costs of investment you have to make is getting smaller and smaller. I’ve always done web stuff, but if you’re an engineer – an electronic engineer or mechanical engineer, you should get stuck in now as well. Here in Betaspring there’s a whole mini-cohort dedicated to “makers” – people who make physical products in a startup way.

How do you get into entrepreneurship?
The single biggest thing is just do it. Get started. Get something crappy on a webpage. I’m predominately talking about web startups which is probably the cheapest way to get started. More specifically if you’re a web startup, it’s extremely difficult to hire technical talent at the moment. It’s massively underprovided for compared to the demand. It’s really important for you to have on your team development and design as core competencies. A lot of the big deals in startups talk about the three things you need are a backend developer, a frontend design user experience guy, and a marketing guy. You might have a team of three – one each, or a team of two where one person tries to do two of these things. But it’s really important you put a team together that has those core competencies.

If you haven’t got any of the three skills you need to learn one now. If you are missing a skill you need to find a co founder or learn it yourself. If you want to learn to code I would suggest starting with a framework called Node. Javascript, despite its warts, is ubiquitous in the web. It’s the only language you can use in a browser. If you have to learn a language, you may as well just have to learn one.

Is there anything you would recommend to do to gain experience before getting involved or is your advice to just start?
Definitely just start. Don’t do replacement activities. The quickest way to understand what you need to learn and what you need to do is by getting spanked by the market or getting spanked by the situation you need to solve and then just fixing it. Don’t keep quiet about your idea. Tell everyone about it all the time. Always be closing. Your job as a founder is to get this off the ground.

You would advise having a cofounder then?
It’s worth asking loads of people but it’s definitely recommended. From my personal experience I would say I’m sure there are people who can do it on their own but it’s really much harder for a lot of reasons. Lots of practical reasons, but psychological reasons as well. Like when things are going badly or not as expected and its hard and you have to double down. If you’re feeling low and you’re on your own that’s going to be a lot harder than if you’re on a team. It’s difficult to start on your own. Some people have done it – Dropbox guy did it.

How have you come up with your ideas?
The idea is not nearly as important as it seems from a beginning perspective. So even if you think it’s not a very good idea it’s really important just to execute. Don’t wait for the perfect idea. Take the one you’ve got now, find five people that say they would buy and it solves a big problem for them and then just get started. You’re very unlikely to finish doing anything like the thing you started doing, so just get started. Don’t let that eventual thing that you will be successful at never happen because you never started.

For us, for example, we iterated four times during the first week of Betaspring pretty hard. We started with this language jam thing, some people brought out some amazing products, like Verbling, and they’d done a much better job than us and were way ahead of us. But we kept on going because we needed to get into an incubator. Betaspring said “we love you guys but this idea has some holes in it” so we went out and showed them some customer discovery and we went through this process where we were iterating within the interview process.

So then we realised that wasn’t going to work so we had to do something else. So we made this site to help Asian students to get into English universities; we did all the business model generation and we went through all these exercises to establish the market and it wasn’t going to work. Then we changed to askanundergrad.com, sourcing a lot of students in a big segmented pool of customer discovery. Companies launching products or small companies or established companies would pay to access a very specific demographic and do an online focus group with them. Then we iterated to, “ok this is still a two-sided market place, it’s going to be difficult to get off the ground and gain a critical mass, so we’re going to overlay on top of an existing growing market which is crowd funding and that’s what dropkic.kr started off as. So we took a very circuitous path to where we are now.

It is important to recognise, that at each stage this is something we could never have predicted. It was external forces and external advice and the way we had that was getting on with what we had then and there.

Advice for others thinking about applying for incubators
Even if you are at the very beginning, go and start the process of applications now and then that gives you an idea of what incubators are looking for, in terms of team, product and all sorts of things. That’s good for two reasons: firstly, practically going in an incubator is an amazing experience. Secondly, obviously their criteria are going to be highly correlated to what makes a successful startup so it’s generally good to try to match their criteria.