Some of the steps you could take in your career open up a greater range of career options than others. The more paths a steps opens up, and the better these paths are in terms of impact, the more it “keeps your options open”.

For example, an undergraduate degree opens up a wide range of jobs: it is essential for around 25% of jobs,1 and an advantage in a huge number of others. By contrast, many vocational qualifications only prepare you for a single career and are of little use elsewhere. As a result, undertaking an undergraduate degree does far more to keep your options open than such vocational qualifications

Our advice is to keep in mind the value of keeping your options open. This is especially true at the beginning of your career but remains relevant throughout. This page explores why it is so important, and what you can do about it.

Why should I keep my options open?

The reason to value career flexibility so highly is that which career options are the most effective changes over time. You won’t always be able to predict these changes in advance, but if you keep your options open, you’ll be able to keep switching into better paths as they come up.

Try to avoid making the mistake of one person we know, who undertook a highly specialised hospitality degree only to discover several years later that he hated working in hotels…

There are many reasons to expect the best options to change unpredictably:

You will discover more about your options
Over the years to come, you will learn more about different career paths, and how well you would suit them. If you have already locked yourself into an area that later turns out not to suit you, it can be costly to change direction.

You will change
Your preferences and priorities are likely to change as you get older, in ways that can be difficult to predict. You may discover skills you never knew you had, or you may find that different things inspire you to work hard.

The world will change
The outlook for different careers changes over time: Forty years ago, telephone operator and travel agent appeared to be jobs which would always be in demand, while few people foresaw the rise of software engineering as a career path.

These reasons above apply to everyone. If you’re focussed on making a difference, then it’s even more important to keep your options open. That’s because over time old problems are solved, and new ones emerge or are discovered.2

Even considering only existing problems, our understanding of which ones are the most pressing improves year on year. If you keep your options open, you’ll be able to take advantage of new research and discoveries to find more high-impact opportunities.3

All these factors mean it’s often more important to keep your options open than have an immediate impact, especially at the start of your career. We make some rough quantitative estimates in the appendix.

How can I keep my options open?

Keeping your options open has something a bad reputation, because people associate it with being non-committal, doing a little bit of everything, and delaying your decisions as long as possible. But that’s not the best way to keep your options open.

Instead, the key is to committing to paths within which you can excel, which give you the opportunity to build flexible resources and abilities. Flexible resources are those that will be useful in many different types of situation in the future. Here’s some examples:

Some skills, credentials and connections (career capital) are more flexible than others and will open doors to many opportunities. As a result, all else being equal, they are more valuable in the long run.

A public platform can often be used to support many different causes. For instance, if you have an opinion column in a major newspaper, you can use it draw attention to many different worthwhile causes.

This is one of the ideas behind the advocacy strategy, and why we include advocacy potential in the top careers list.

Earn and save money

Having money in the bank keeps your options open, because money can be used to support a wide range of causes. Donations can also quickly be shifted to a newly-discovered, more effective cause, and unlike switching jobs there are very few transitional costs. Money can also give you the flexibility to take a break from work, start a new organisation, or invest in education.

The flexibility given by earning well is one of the drivers behind the earning to give strategy, and why we include earnings potential in the top careers list.

As another example, it is easier to go from high-status corporate careers like consulting into the social sector than the other way around. As a result, starting out in corporate careers is a better way to keep your options open.

Appendix – An illustration of the importance of keeping your options open

Suppose that at the start of your career you make one unit of impact (UI) every five year period. As a result, over ten years in this career your impact would be:

We think it’s likely that an option that’s twice as good will arrive in five years.4 If you have kept your options open, then over the same ten years your impact could be:

Even if you only shift that one time, over 40 years the difference is significant:

But if you shift to an option twice as good every five years, the difference is phenomenal: 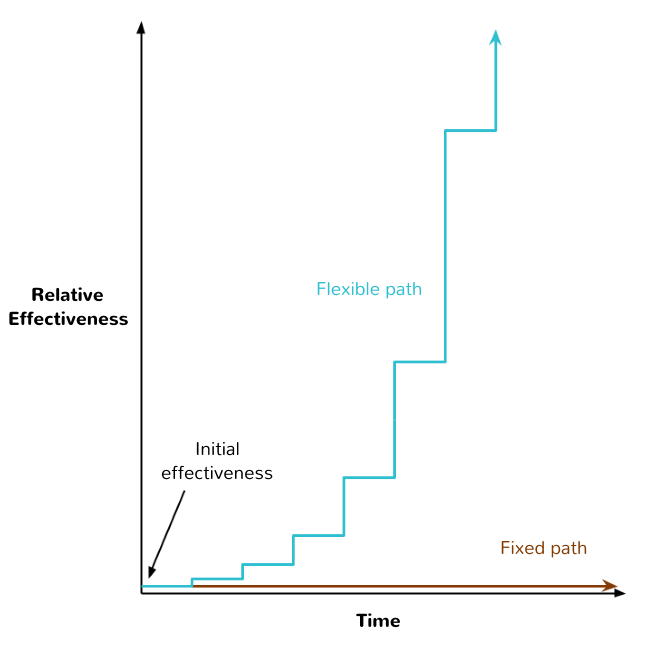