Do you want to work in health, but don’t fancy nursing or medical school? Meet the ‘Allied Health Professions’. These are the people who helped your sister overcome her stutter (speech pathologists), prescribed your friend their glasses (optometrists), and took the x-ray that time you stubbed your toe so hard you thought you’d broken it (diagnostic radiographers).

The allied health professions give you the high job satisfaction of helping patients and will continue to be in demand as the population ages. The training pathways are shorter and less competitive than for medical doctors, and compared to most nurses you’ll have more say over how to treat your patients — plus the pay is often better, sometimes over $100 000 per year. The downsides are that the skills you build aren’t very helpful outside your profession, the best paying options still require up to 8 years at university, and as with any health career in the developed world it’s hard to have a large direct impact.

Overall, this is a reasonable option for earning to give, especially if you want an agreeable work schedule, could work in the US or Australia, and can get into the more highly paid professions like dentistry and optometry. Just keep in mind that the big investment in training required for this narrow career path means it’s especially worthwhile for you to explore your options before studying to become a health professional.

Our reasoning for these ratings is explained below. You might also like to read about our approach to rating careers.

We don’t recommend this career unless you are an exceptionally good fit for it.

What’s this based on?

The primary author, Brenton Mayer, who works for 80,000 Hours, drew on his initial training in dentistry and previous experience working as a doctor. We spoke to three people working in these professions and ran a draft of this review past two additional people working in healthcare. We also read existing career profiles on ONET, Prospects and the BLS Occupational Outlook Handbook, as well as some relevant academic literature.

What is this career path?

Rather than being initially trained as generalists like nurses and doctors, allied health professionals are trained to look after a particular set of conditions, and do so mostly independently. For instance, physical therapists can diagnose and treat most causes of joint pain, but if your physical therapist thought your knee pain was caused by something that they couldn’t treat, they would send you to someone who could — perhaps a surgeon.1

Below, you can see a list of the careers we researched. The boundary around “allied health” is vague. We didn’t include clinical psychologists, social workers or alternative health practitioners, even though they’re often included. We did include dentistry, even though it’s often excluded.2 We have separate profiles on medicine and nursing.

Note that the requirements and income vary by country, so follow the links here to get figures for your location:

Why do this career?

Most of the jobs in the area earn over $70,000, which is still twice the median income,4 and earnings are generally higher than nursing at $67,000.

However, the incomes are still much lower than medicine, which earns a median of over $200,000, but is far more competitive.3 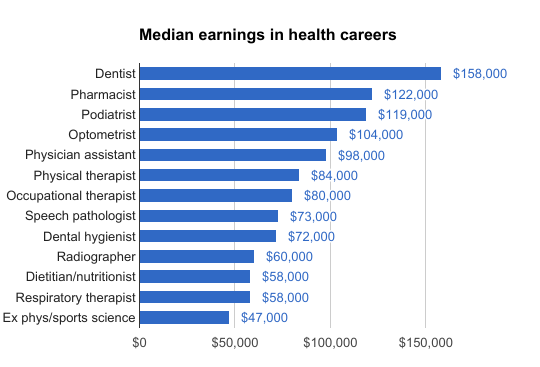 Health professions by median earnings in the USA. (Source: Bureau of Labor Statistics)

The highest-earning paths are the most competitive and take the longest time to qualify for. For example, becoming a dentist in the US requires completing a bachelor’s degree with a GPA of around 3.5, and then a 4 year postgraduate degree.

For those interested in respiratory therapy, the minimum entry requirements are a GPA of 2.5 (or an SAT score in the top 50%), and you can graduate after 2 years.

In contrast, you can be admitted into a respiratory therapist course with a GPA of 2.5 or an SAT score in the top 50%, and graduate after two years.5

In the UK it’s more common for undergraduate degrees to lead directly to work, but earnings are markedly lower — British health professionals earn around half as much as their US colleagues.6 This is significantly lower than the difference in per capita income, which is only about 20%.7

Health is a growth area Turning to the long term, a study by academics at the University of Oxford suggests that jobs focused on delivering patient care are at low risk of automation in the next couple of decades (you can see the estimates for individual professions here)9. This is because it’s difficult to teach computers to correctly interpret and precisely interact with the changing physical space around them, and it’s even more difficult to program the social intelligence needed to look after patients.

At least two occupations are worth mentioning as possible exceptions to this generally rosy picture:

Surveys find that most health professions are in the top 25% of jobs in terms of job satisfaction. Physical therapy (a profession which treats a particularly high variety of conditions) fairs especially well, coming in as the second most satisfying job in one survey and the twelfth (out of 274) in another.14

This is what we’d expect since the work does well on all the ingredients of job satisfaction we’ve identified in our research. Allied health professionals directly help people in their work, which is satisfying. The work is also engaging: they have clear tasks with frequent feedback and significant responsibility for diagnosing and treating patients. They’ll work alongside other healthcare workers who they can discuss complex cases with, and they typically have less shift work than nurses and less demanding hours than doctors.

However, there are some negatives. One issue is that several professions, including optometrists and diagnostic radiographers, report a lot of repetition in their jobs, which decreases how engaging their work is.15 Another issue is that many allied health professionals become highly proficient early on and are able to practice unsupervised a year or so after graduating. Whilst mastering your field is good for job satisfaction, doing so right at the beginning and then rarely being exposed to work you find challenging probably decreases job satisfaction. This could be a problem for those professions that have relatively few options for career progression (such as dental hygiene).16

Reasons not to work in a health career

Some positive direct impact, but less than many people think

When working in health, it feels clear that you are helping your patients. Yet, as we explain in the article on medical careers, clinical practice in the developed world only has a modest impact. The key reason for this is that healthcare is already (relatively speaking) well funded in rich countries, so the easy opportunities to help people are already taken, which means additional people and money only have a small impact.

Our analysis was focused on doctors, but we think the impact of allied health professionals is unlikely to be significantly higher.

If you wanted to improve health, you could do more good by donating just a small percentage of your income to effective global health charities than by working directly within a rich country.17

If you wanted to maximise your direct impact as a health professional, what could you do?

Whilst these are possible, note that only a small proportion of health professionals take these routes, and if you’re aiming to get into one of these areas there are likely better ways to get there. Degrees in medicine (for developing world work), health policy (for improving the healthcare system) and biomedical science/medicine (for high impact research) are all probably better options.

Overall, we think that the most promising way to have a big impact through the health careers we’ve reviewed is through earning to give, which is why this profile has been so focused on income and why we generally recommend people take the higher earning options.20

In the UK, studying a health profession means making a call at a young age that you’ll remain interested in practicing your specialty for long enough to justify the 3-5 years you’ve spent training for it. In the US, you make this decision later in life because the degrees are often postgraduate, but it means a larger financial commitment and more total time at college (often 8 years in total for the most high-earning options).

What’s more, this training only prepares you for a narrow role. We normally recommend people build ‘flexible’ career capital early in their career, that is, skills, connections and credentials which will be useful in a wide range of jobs in the future. This is because it’s hard to predict how the job market will change and what you’ll be interested in in the future.

A degree in allied health, in contrast, mainly trains you for a single speciality which exists in a small set of work environments (clinics and hospitals in the developed world). So if you want to leave the career later, you won’t be in a much better position. This could easily happen if your preferences change, you find a better way to have an impact, or if the career does turn out to be vulnerable to automation.

Allied health even compares poorly to other vocational training, such as law, accounting or programming. If you qualify as a lawyer, there are many of types of legal work open to you, and legal knowledge is useful in most sectors of the economy, so even if you decide to leave law, you’ve gained something. Studying maths or economics would be even better again for flexibility.

What are the best options among the health careers we considered?

The following four stand out.

Who is most likely to succeed in these careers?

We think most of the social impact of working in these careers will come from earning to give, and once you’re in the job, the pay doesn’t vary that much (in contrast to something like sales, law or finance). So the key question is whether you can get into a university course, and whether you will enjoy the job enough to remain motivated.

The following factors seem to predict success in the health professions:

How does it compare to nearby alternatives?

Below we make some very rough comparisons between allied health and nearby options people often consider.

In all cases, the key consideration is your degree of personal fit. If you excel in an area, you’ll gain better career capital, be happier, earn more, have more direct impact, and have a bigger chance of making original contributions to the field. For instance, it’s probably better to be an outstanding nurse than a typical occupational therapist, even though occupational therapists earn more on average.

Again, in all cases, the general pros and cons need to be weighed against how much you’d enjoy the job and how good you’d be at it.

Should you become an allied health professional?

Here are some key questions to ask yourself.

As always, if you couldn’t imagine yourself doing anything but working as an allied health professional, you should probably become one.

How to learn more and test out your potential

Before committing to a university course, you can test out your fit for a career in health by:

How to enter this path