How much will your personality, values and preferences change over the next decade? Probably more than you think, at least according to a recent paper, “The End of History Illusion“1 by a team of psychologists at Harvard and the University of Virginia.

In a number of separate experiments, the authors asked a total of over 19,000 people between 18 and 68 to measure their current personality, values and preferences2. Half of them were also asked to complete the assessment as they believed they would have done ten years earlier, while the other half were asked to predict what they would say in ten years’ time.

If people were accurate in their predictions of how much they will change, you would expect the data sets to match. In fact, the experiments consistently showed that people underestimated how much they would change.3 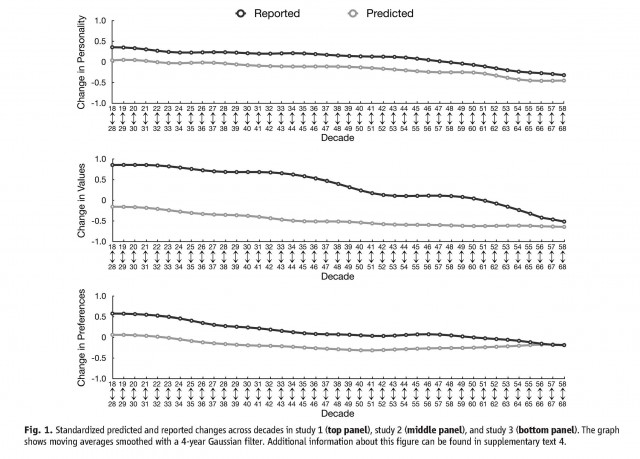 The results show that people change throughout their lives (although the rate of change slows as people get older), a result consistent with other studies.

More interestingly, while the participants in the study were able to recognise that they have changed in the past, people of all ages seem to believe that that process of change has come to an end for them. As the paper’s authors say:

[They] seem to believe that the pace of personal change has slowed to a crawl and that they have recently become the people they will remain.

You can watch author Dan Gilbert discuss his findings here.

The paper mentions teenagers getting tattoos which they will want removed later in life and young adults marrying people they will later want to be rid of. But what does this mean for our careers?

The fact that your personality, values and interests will change in the future is a major reason to keep your options open, as we’ve argued before.

However, this paper also suggests4 that you probably underestimate how much you’ll change. This means you should try to keep your options open even more than you first think.