One of the most important (though maybe regrettable) long-term trends effecting the outlook of many careers is the rise in income inequality. In countries such as the United States and the United Kingdom, the difference in earnings between the best and worst paid has risen sharply for the last few decades, with the top earners taking a higher and higher proportion of total income. From the early 1900s to the 1970s, income inequality gradually decreased. However, in Anglo-Saxon countries it began to rise again from the late 1970s. The rise was sharpest in the United States, where the income share of the top decile of earners rose from 33% to 48% in forty years, while the share of the top percentile rose from 8% to 17%.1 In Japan and the rest of Western Europe on the other hand, inequality was either steady or rose much more gradually.

Increasing income inequality means a better outlook for many high-earning careers. It may also reflect trends in which skills are most in-demand and useful as technology changes, making it important to understand if you want good career capital in the future. Finally, it may mean the financial rewards of being at the top of a profession (compared to the middle) are increasing, and this means the importance of personal fit is increasing. 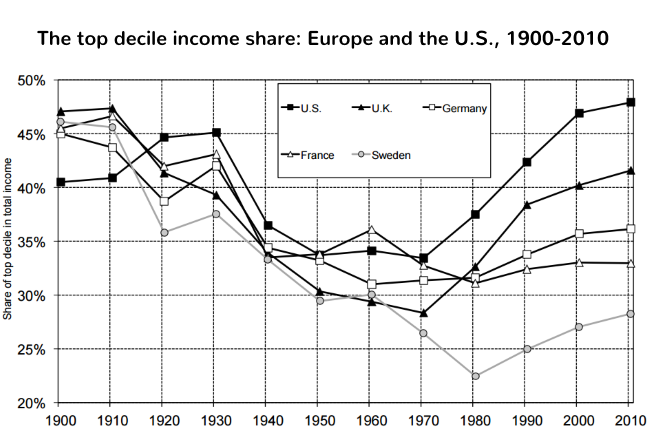 In the rest of this post, we’ll look at the reasons economists have put forth for the increase in income inequality, and speculate on whether the trend will continue.

Why is inequality rising?

There is disagreement between economists on the reasons for this increase. Part of the explanation is that high-skilled labour came to be much better paid than low-skilled labour, although that’s not the whole story. Focussing on the United States, here is a summary of factors cited by George Borjas in his leading economics textbook, and by Thomas Piketty in Capital in the twenty-first century:3

From the 1970s to the 1990s, the US experienced a sizeable increase in international trade (with imports and exports going from 8% of GDP to 19% by 1996). This meant that a lot of low-skill work was effectively outsourced to less-developed countries, reducing the demand for workers. At the same time, exporting industries boomed, industries which tended to hire higher-skilled workers.

As technologies improved, they took more and more work away from low-skilled workers. At the same time they often acted as a complement to high-skilled workers, boosting their productivity, and required educated technicians to manage them. The prime example of this is the rise of the personal computer, which made managers more valuable while reducing the need for filing clerks and a typing pool.4

Between 1966 and 2000, around 25 million legal and 8 million illegal immigrants entered the United States. These immigrants were disproportionately low-skilled, increasing the supply of low-skilled compared to high-skilled workers. And following decades of continued expansion, in the 1980s the number of college graduates each year stopped increasing (possibly due to educational policy), limiting the supply of high-skilled workers while demand continued to increase.

Social and political changes in this time period led to a major decline in union activity, which had previously worked to protect wages for some of the least well-paid. At the same time, the minimum wage was allowed to stagnate rather than rising with inflation, remaining at $3.35 per hour throughout the 1980s. The result was that the income of those at the bottom failed to keep pace with the rest of society.

The rise of executive salaries

The pay of senior managers at top firms has exploded over the past few decades. Piketty argues that large reductions in top income tax rates in Anglo-Saxon countries have incentivized managers to seek and receive higher and higher salaries; this is despite the fact that their productivity continues to be no higher than their counterparts in other countries.5 He also points out that it is particularly difficult to assess the actual worth of these individuals to companies, and that in many cases senior managers have a large amount of control over the setting of their own salaries.

The explosion in executive remuneration is supported by a corporate culture which increasingly sees senior managers as exceptional talents:

“Simply put, wage inequalities increased rapidly in the United States and Britain because US and British corporations became much more tolerant of extremely generous pay packages after 1970.”6

Going further, it is possible that decision-makers in the US and other Anglo-Saxon countries have simply come to view a wider range of incomes as better reflecting natural differences in ability levels, while their counterparts in other developed countries have not. As well as executive pay, this would help explain the different approaches of these countries to issues such as unions and the minimum wage, and ultimately why the sharp increase in inequality is much more pronounced in Anglo-Saxon countries.

What does this mean for the future of the trend?

With so much dispute over the causes of rising income inequality, it is difficult to predict whether and for how long it will continue to increase.

Assuming that culture is indeed an important factor, then it is worth noting that the public mood may be shifting: there are increasing protests against very high pay, and calls for low-skilled workers to be paid a “living wage”. Whether this leads to real change or fades away remains to be seen.

If technological change continues and education is still unable to keep up, the demand for high-skilled workers will remain high and their salaries will continue to rise.

Overall, it’s hard to say: there could easily be a short-term reduction in income inequality (e.g. caused by changes in tax policy), but there’s a good chance the long-term trend continues upwards.