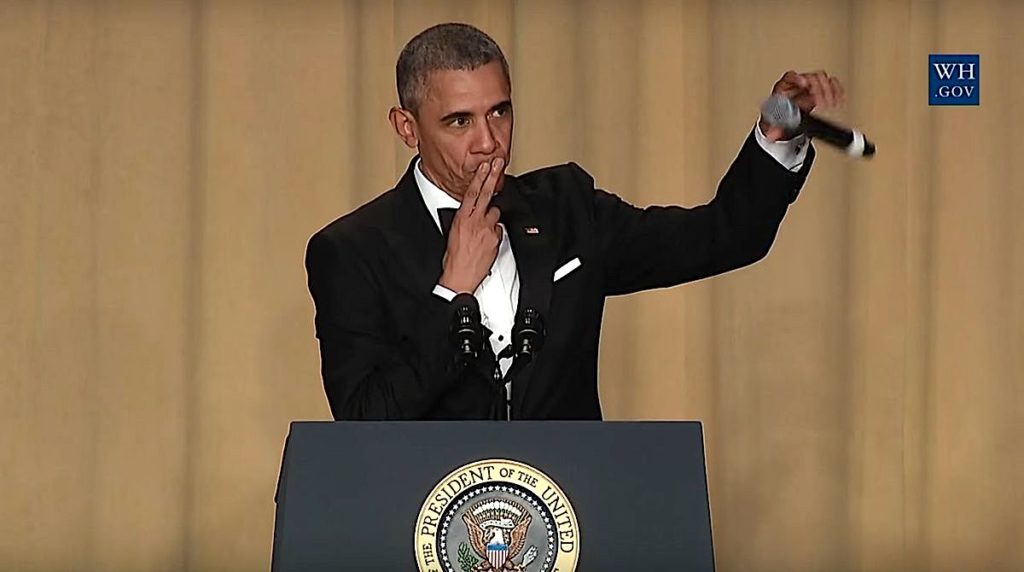 One of my favourite studies ever is ‘Heads or Tails: The Impact of a Coin Toss on Major Life Decisions and Subsequent Happiness’ by economist Steven Levitt of ‘Freakonomics’.

Levitt collected tens of thousands of people who were deeply unsure whether to make a big change in their life. After offering some advice on how to make hard choices, those who remained truly undecided were given the chance to use a flip of a coin to settle the issue. 22,500 did so. Levitt then followed up two and six months later to ask people whether they had actually made the change, and how happy they were out of 10.

People who faced an important decision and got heads – which indicated they should quit, break up, propose, or otherwise mix things up – were 11 percentage points more likely to do so.

It’s very rare to get a convincing experiment that can help us answer as general and practical a question as ‘if you’re undecided, should you change your life?’ But this experiment can!

I wish there were much more social science like this, for example, to figure out whether or not people should explore a wider variety of different jobs during their career (for more on that one see our articles on how to find the right career for you and what job characteristics really make people happy).

The widely reported headline result was that people who made a change in their life as a result of the coin flip were 0.48 points happier out of 10, than those who maintained the status quo. If the assumptions of this so-called ‘instrumental variables’ experiment hold up, and it’s reasonable to think they mostly do, that would be the actual causal effect of making the change rather than just a correlation.

But if we actually read the paper we can learn much more than that.

We can dig deeper and see which specific changes people particularly benefited from. Stick with me for a moment. The study says:

OK, so job quitting and breaking up both have “very large, positive, and statistically significant coefficients at six months”. How big? Ludicrously, insanely big.

The causal effect of quitting a job is estimated to be a gain of 5.2 happiness points out of 10, and breaking up as a gain of 2.7 out of 10! This is the kind of welfare jump you might expect if you moved from one of the least happiness countries in the world to one of the happiest, though presumably these effects would fade over time.

Both results are significant at the p=0.04 level, and fortunately I don’t think Levitt had many if any opportunities for specification mining here to artificially drive down the p value.

You can see the full results from table 3 in the paper here. I’ve put the key numbers in the red box (standard errors are in parentheses): 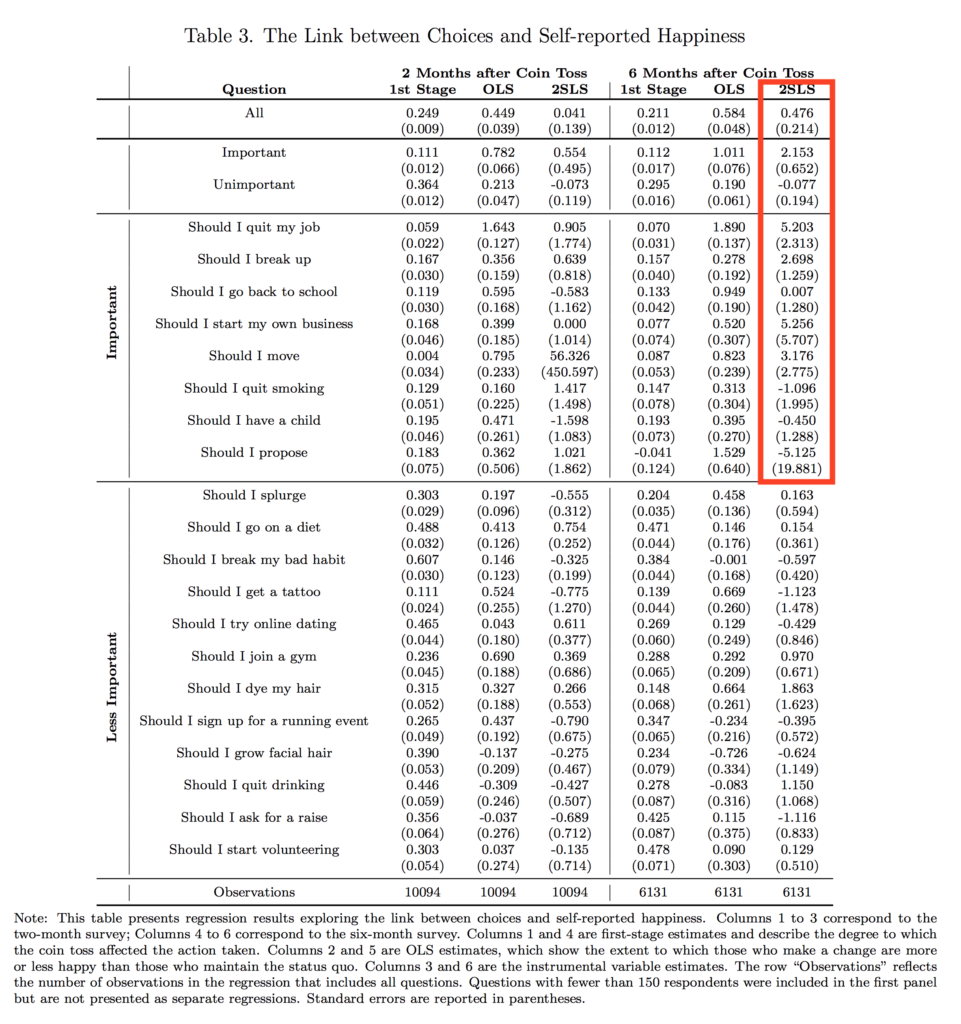 Jonatan Pallesen kindly turned this into a graph which makes it easier to see how few of these effects are statistically significant (all but two of the confidence intervals include zero): 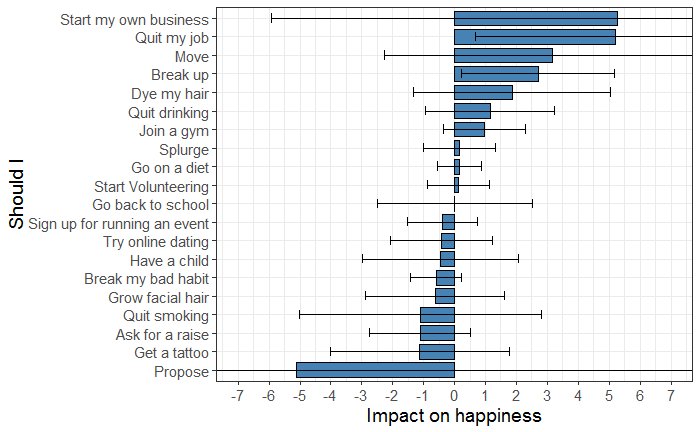 How much can we trust the ‘quit job’ and ‘break-up’ results? On the plus side:

On the other side of the ledger:

On this question of reliability, Levitt says:

“All of these results are subject to the important caveats that the research subjects who chose to participate in the study are far from representative, there may be sample selection in which coin tossers complete the surveys, and responses might not be truthful. I consider a wide range of possible sources of bias and where feasible explore these biases empirically, concluding that it is likely that the first-stage estimates (i.e. the effect of the coin toss on decisions made) represent an upper bound. There is less reason to believe, however, that there are strong biases in the 2SLS estimates (i.e. the causal impact of the decision on self-reported happiness).”

On balance I think this is a good, though not decisive, piece of evidence in favour of making changes in your life, and specifically quitting your job or breaking up, when you feel genuinely very unsure about whether you should. At least for those who earn over $50,000 and whose goal is their own happiness.