If you’re committed to making a difference with your career, you may well find that there is a tension between doing good now and laying the groundwork for doing good later.

How can you go about deciding between these options? Here we present a summary of our findings. The full research has been published by Oxford University’s Global Priorities Project.

Summary of our findings 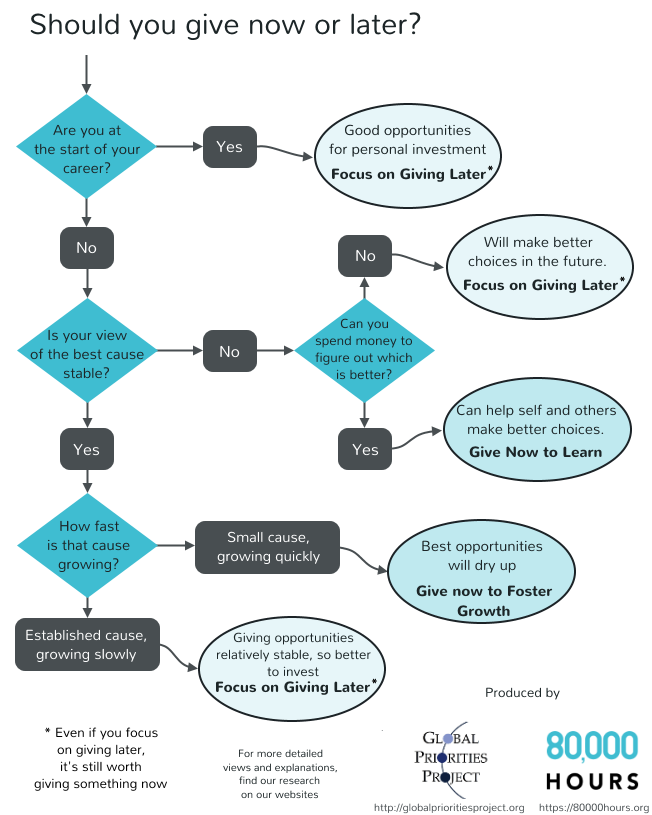 Summary: should you donate money now or later?

First, focus on saving enough to live for at least six months with no income, then start saving a reasonable amount for retirement (typical advice is 15% of income) and paying down any high interest rate debt. During this period, aim to give 1% so you stay engaged with giving and keep learning about which charities are most effective.

After that, whether to give now or later depends on a couple of factors. If you’re very uncertain about where’s most effective to give, then it’s probably best to invest the money and give it later. We’d recommend doing this in a donor-advised fund to save tax (here’s a guide).

This is especially true early in your career, because there are probably ways you can invest in yourself that could have a big return, such as: graduate study, doing a programming bootcamp, or spending money to meet people who can boost your career e.g. by going to the right conferences.

Summary: Should you give your time now or later?

Early career, we recommend focusing on building career capital because we think there’s generally a lot you can do to improve your skills and put yourself in a much better position to make a difference long-term.

During this period, however, try to stay engaged with other people who want to do good, so you keep learning about social impact and stick to your values. (And ideally find something that both builds career capital and has a social impact.)

After that, the balance again depends on which problems you think are most pressing. If the problems are more urgent, then focus more on short-run impact, and otherwise focus on career capital.

If you’re very uncertain about which problems are most pressing, then focus on building flexible career capital e.g. learn transferable skills like marketing and management.

The main factors in more depth

The main argument for doing good now is that the best opportunities are getting snapped up, so that the longer you wait, the harder it will be to have the same impact with your work or your donation. Opportunities for bigger and easier interventions are likely to be taken sooner, before it’s considered worthwhile to look into smaller and more difficult areas.

On the other hand, research continually improves our understanding of which interventions are likely to be effective. As a result, the opportunities for doing good may actually increase over time: just because an intervention is big and easy, doesn’t mean anyone even knew it was possible 20 years ago!

Another critical factor to consider is the extent to which investing your time or your money will give increased returns in the future. Invested money will increase at a pretty standard rate throughout your life. By contrast, the rewards for investing in yourself are likely to be much higher if you prioritise this early in your career: many people dramatically increase their ability to earn and change the world in their first twenty years of work by learning skills, gaining promotions, studying further and building networks (see more).

If there are plenty of good opportunities to invest in yourself, as is often the case early on in your career, then our recommendation is that it makes sense to wait. You’ll have more impact in the long-term by prioritising your career capital now, then focusing on making a difference later. (Although we don’t advocate neglecting doing good entirely: see the section on burning out below.)

Certainty about the effectiveness of causes

How certain are you are in your views about which causes are the best? If your views are unstable, this tends to point towards waiting until you are more certain. Otherwise, you could give up opportunities for investment, only to find out that the cause you’ve been supporting isn’t that effective after all!

The exception to this is if giving will allow you to learn more. This might involve working in or funding causes you think are contenders to be the best, or funding comparisons between them. This option is particularly good if you can get information that will help not just you but other people in similar situations. In this case we think that the best option is likely to be to give now to improve your knowledge about which causes are best.

(See more on how to choose a cause.)

The attention causes have received

Just as opportunities to do good diminish in general (as set out earlier), they will also diminish within a particular cause. The result is that the more attention a cause has already received (in terms of research, man hours, donations etc), the less effective additional resources will be.

Therefore in areas where little has been done, and which therefore have the potential for fast growth, helping now may be particularly valuable: if you wait, the best work may already have been done. By contrast, in areas which are well-established, the difference between helping now and helping later is likely to be less pronounced.

One area where this recommendation is ambiguous is in global poverty interventions focused on cost-effectiveness. Development aid as a whole is a large area which is not quickly growing, but it may be that the proportion of spending which is directed towards the most cost-effective interventions is increasing quickly. It’s unclear which is the more appropriate reference class, and we are not confident whether it’s better to give now or later in this case.

The factors considered above are the main ones, but they are not exhaustive. Below are a couple of other points worth considering.

Even if you are focusing on giving later, it may well be best to do something now in order to avoid burning out or getting out of the habit of doing good. Doing good can make you happier, help you to stay motivated, and bring others on board by demonstrating your commitment.

So, it seems advisable to stay involved in making a difference in at least some capacity, perhaps by donating 10% of your income, befriending other altruistic people, and making a public declaration of your intention to lead a high-impact career. In a similar way if you are giving now it may still be worth holding on to some investment as personal reserves.

You can only claim tax relief against this year’s income, which means you’ll get more tax relief if you give now. However, you can get around this issue by putting your funds into a Donor Advised Fund. There could also be other tax considerations that push one way or the other.

Click here for more information about our research and the models we have used to come to these conclusions.